Snowshoes and Ragdolls. What do these two breeds have in common? How do they differ? Most importantly, what makes each of them great for their owners?

Whether you’re looking for a new pet or just want to learn more about the two breeds, here is your complete guide on Snowshoe vs Ragdoll cats!

The Ragdoll Cat is known for its relaxed, friendly temperament, large size, non-mating coat, and striking blue eyes. However, the defining trait of the Ragdoll Cat is the flop! Ragdoll Cats go completely limp and relaxed when picked up and held. Ragdolls are a relatively recent cat breed, having originated in California, USA in the 1960s by breeder Ann Baker.

What is a Snowshoe Cat?

Snowshoes are an affectionate, gentle and laid-back cat who enjoys the company of humans. It gets its name from the white points on its feet. Like the Ragdoll the Snowshoe Cat is a relatively new cat breed having originated in the 1960s in Philadelphia, USA by breeder Dorothy Hinds Daugherty by crossing a mismarked siamese cat with white feet, with a bicolor American shorthair.

Ragdoll and Snowshoe are colorpoint breeds of cats, with a light body colour and darker ears, face, tail and legs. The Snowshoe’s traditional facial marking is similar to that of the Bicolor Ragdoll with an inverted V marking on its face.

The Ragdoll has a medium-sized head and ears with a triangle face and oval eyes.

A Snowshoe’s head can be either triangular or rounded with walnut-shaped eyes. Their ears are wide-set and pointed. The feet are white, giving them the appearance of being covered with snow.

Both cats are known for their stunning blue eyes.

Ragdoll and Snowshoe kittens are born entirely white, with colour developing on their extremities over the course of the first few weeks of their lives.

The American Cat Fanciers Association (ACFA) only recognise Seal and Blue as breed standard colors. Whereas the Ragdoll has a more varied color palette of Seal, Blue, Chocolate, Lilac, Flame and Cream.

The colours of tortoiseshell, tabby, and tortoiseshell-tabby coat patterns are also recognised by the Fédération Internationale Féline.

Ragdolls have a much larger body size than Snowshoes, with Ragdolls typically weighing in at around 15-20 pounds while a Snowshoe may weigh only 6-12 pounds.

The Ragdoll Cat is a cat breed with medium to long fur. It has a non-mating coat that is silky and lustrous in appearance and has a texture comparable to rabbit fur. Ragdoll cats are recognised for their fluffy mane of fur around their necks, which grows thicker as they get older.

A Snowshoe Cat’s coat is short to medium in length, and, like the Ragdoll, it is silky in appearance and non-mating.

Both cats are similar in that they do not have an undercoat, meaning less shedding and minimal grooming is required.

Both breeds are affectionate, gentle, and laid-back cats who enjoy the company of humans.

Snowshoe Cats are known for their unique personality traits. They are very social creatures and enjoy interacting with their family members. They are very playful and energetic. They are very active and enjoy running around and playing. Snowshoes love water, especially rushing water, and may swim on occasion.

Ragdolls are known for being one of the most friendly cat breeds. They have earned the nickname ‘puppy-dogs’ for their dog-like nature. They are known to greet you at the front door when you enter the house and spend time following you around the home.

Both breeds dislike being left alone for lengthy periods of time and find it easier to cope with working hours if they have a feline companion.

The Ragdoll breed is generally considered to be a quiet breed as opposed to a vocal cat like the siamese cat. Their meows are soft and musical. Some Ragdolls, however, do tend to meow more than others.

Being related to the Siamese Cat, Snowshoes have the ability to vocalise their feelings and complaints, albeit their meows are not as loud as the Siamese.

Snowshoe Cats are intelligent, inquisitive and curious animals. They are often found playing with toys and like to explore and investigate their surroundings. Some owners have reported that their Snowshoe cat has learnt to open doors.

It is possible to train both breeds to walk outside on a harness and leash.

Both cats are very playful, although the Snowshoe is more active than the Ragdoll. The Ragdoll is happy to lounge around all day, whereas the Snowshoe is athletic and speedy and enjoys perching in high places.

Compatibility with children and other pets

The Ragdoll and the Snowshoe are relatively robust breeds of cats with very few major health issues.

Both cats are known for their longevity, with the average lifespan of both breeds ranging from 15 to 20 years.

So, are Ragdoll cats and Snowshoe cats the same? There are some similarities between the two breeds, but there are also some key differences. If you’re considering getting a cat, it’s important to do your research and find the breed that best suits your lifestyle and personality.

Discover the differences and similarities between Ragdoll and Himalayan Cats

Discover how the Ragdoll cat compares to other cat breeds 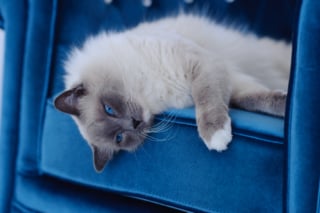 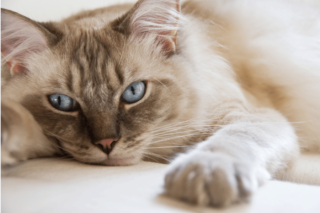 A ragdoll cat is a cat that has been bred to have a very relaxed and mellow temperament. They are color pointed cats...

A question asked a lot is 'Can a Ragdoll Cat be Grey?' When you look at a ragdoll cat breeder's website, you might be...